A rework of my previous Electro-Magnetic Beetle class to better fit the GLOG's rules for wizards.

Lightning Rod: You can expend two Magic Dice to act as a lightning rod, redirecting a bolt of lightning or lightning-related spell from its target and towards yourself.

Giant Beetle: Your movement is 14. Your exoskeleton gives you defence +4 as if it were armour, but it takes up no inventory slots. Your mandibles deal 1d10+str damage and are a heavy weapon. You can communicate in beetle language and morse code by clicking your mandibles. You have six legs and no arms.

Electro-Magnetic Shell: Your exoskeletal shell functions as a staff (as per Coins and Scrolls' rules) which can only be charged by being struck by lightning. When struck by magical lightning your shell gains MD equal to the [dice] spent on the spell. When struck by non-magical lightning your shell gains MD equal to the number of damage dice. Absorbing the energy of lightning in this manner negates its damage unless you exceed your shell's capacity of 6 MD, in which case damage is dealt as normal.

Restrictions: You lack hands and cannot climb ropes or use weapons that are not specifically designed for your form. You cannot use wands or staves other than your Electro-Magnetic Shell.
Cantrips:

A rework of my previous Electro-Magnetic Beetle class to better fit the GLOG's rules for wizards. art by @bigmsaxon on twitter Electro... 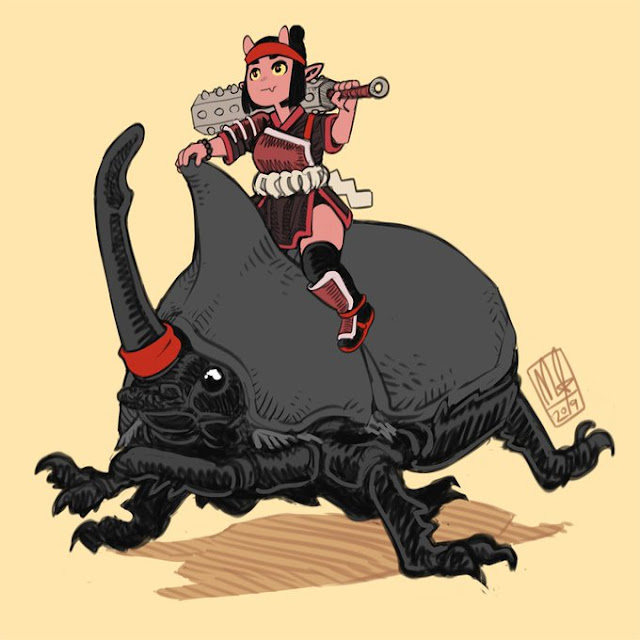